The Seven Awliya of Marrakesh 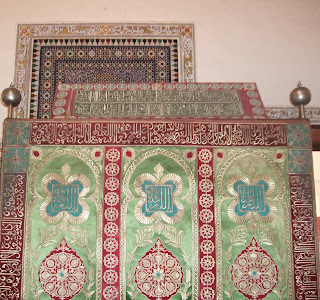 The word Marrakesh was known to come from two words Murra and Kesh. Mura meaning to pass by and Kesh meaning quickly. It was given this name due to the amount of thieves that were active in the area. Never did I possess an inclination to visit this city until I read about the seven Awliya of Marrakesh then from that moment I was determined to visit them.


What is a Wali? Who are the Awliya?

Awliya is plural of the word Wali. A Wali is someone who is blessed with a rank among the Muslims that only religious folk can understand.We have three levels of Wali.
1. The average believer
2. The special Muslim
3. The elite.
A wali can be either level 2 or 3.

They are people who Allah has blessed with a special rank amongst the Muslims in their time. This level is nothing like Prophethood but is a level that a person can be blessed with. Prophethood is a rank that is sealed and closed by our Prophet (may Allah bestow peace and blessings upon him). For prophetic proof that there can be wali or awliya look to hadith about whoever declares war against my wali; I (Allah) declare war on him.

Morocco, like other countries, is a place filled with the graves of such men but this rank is not limited to men. The female Awilya are hidden unlike their male counterparts. There are Awliyas who are hidden for a reason, even in our time.


So why pray at their graves?


For a start we are not praying to THEM we are seeking their aid in our supplication. When one of the Awliya says ameen to your supplications it carries a weight that you cannot add on your own. We remember someone mentioning that they supplicated at the grave of an author of a particular text that they were having trouble with. After the supplication they found that they had no problem with the text.

The famous aesthetic called Ma’rrof Al-Kharki (may Allah be pleased with him) grave is known is the tested elixir/Triaq Al-Mujarab as many people have supplicated to Allah in its vicinity and seen it accepted.

Imam Ahmed ibn Hanbal (may Allah be pleased with him) had an ailment in his arm which no doctor could treat. He went to Ma’rrof’s grave and wiped his arm upon his grave and his arm was healed. So the visiting of graves of the Awliya is something that has been done for centuries.

Unfortunately, in some countries unislamic practices have become prevalent like fairs, dancing and other acts of ignorance. This type of behaviour is of course wrong and the sacredness of these places needs to be maintained.

The Awliya, in the grave, experience a breeze from paradise according to the hadith and if you visit a well known Awliya you should experience tranquillity. So don’t you think that your supplication will be different when it is done within the proximity of the breeze of Paradise?


Try it yourself, go to a grave of a well known Awliya and pray to Allah (the Exalted).You should know the difference and you should realise in your heart that these places are different to other graves.

So amongst the famous Awliya of Morocco are the Seven Awliya of Marrakesh. These are seven men who shone in their times as lights of guidance because of the blessings that Allah (the Exalted) showered upon them. 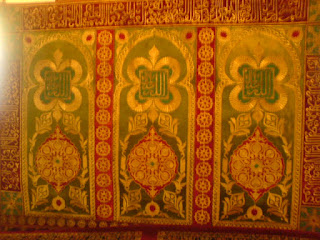 Is one of the most famous of the Seven Awliya as he is writer of the book Dalail Al-Khairat. Who wrote this after witnessing a girl invoke supplications upon the Prophet (may Allah bestow peace and blessings upon him) and scoop some water out a well that was totally empty previously.

Each Wali has a secret and Imam Jazuli’s secret was invoking supplications upon the Prophet (may Allah bestow peace and blessings upon him). 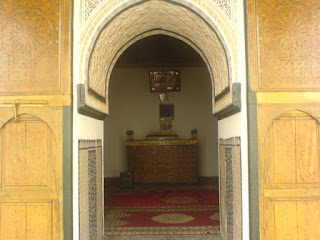 Was one of the great Maliki jurists and scholars of his time. He wrote many works that benefited the Muslims including Raud Al-Unuf which is an invaluable work on the Sirah of Ibn Hisham. His secret was knowledge and through this he served the Muslim Ummah. 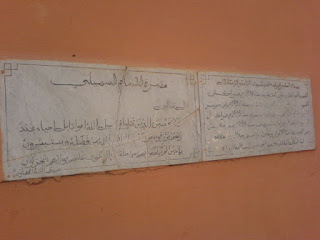 His grave can be found outside the city walls. Where you will see this sign and his name on a wall, when you enter a walled graveyard and walk towards the other side of it you will see a masjid like structure and the Imam is buried there. 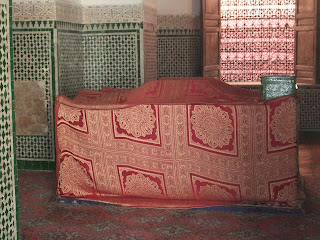 He was a scholar and Prophetic narration expert. His secret was love towards the Prophet (may Allah bestow peace and blessings upon him). 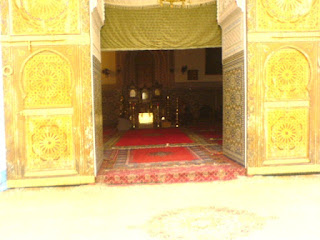 His secret was the giving of charity he was known to give whatever he had to whoever asked. He once gave the shirt off his back to someone who asked and waited in the cold. Then unexpectedly the ruler sent ten sets of clothing to him. 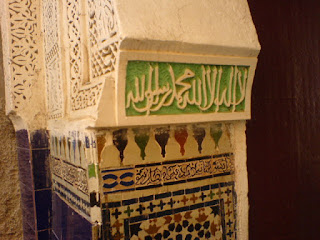 Who was one of the leading students of Imam Jazouli and worked to proliferate spiritualism in Morocco. Even though his secret was not told to me it appears that it was a service to the spritual path and his teacher.

His biography can be found here
http://www.dar-sirr.com/Sidi-Abdellaziz-Tabbaa.html

A picture of his grave
http://www.marrakech-ville.com/sidi_tebbaa.php

A picture of his grave can be found here.
http://www.marrakech-ville.com/sidi-ghazouani.php 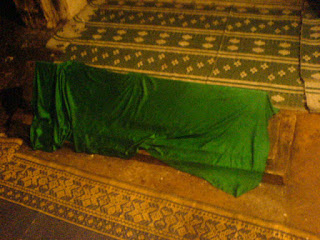 He was not known for his learning. He was instead known for his patience and acceptance of the divine decree. He had leprosy and would lose parts of himself which made people flee from him in fear of contracting the disease. He would seclude himself from the people and invoke Allah (the Exalted) through his patience he was given a great blessing.

His seclusion was a small building in which there was an underground room in which he spent his days and where he was buried. Despite having this disease he would throw parties when he would lose a body part.

He was an exemplar of accepting the divine decree and this was his secret patience and acceptance.

Each Wali has a secret in which they can approach Allah (the Exalted) by performing a specific action frequently.

This is not the same for all people as you have seen from the Awilya above each one has a different in which he approaches. Remembrance of the divine and serving the Muslim nation are one of many doors.

We had intended to write more but unfortunately due to time constraints this was not possible but this will suffice for the meantime. Anyone who desires to visit Morocco should consider going to Marrakesh and visiting these men. And if you do then don’t forget that you should make your supplications and leave. Rather than hanging around, as there are lots of crazy things going on (in Marrakesh not at the graves)! So pay your respects and move on, Fez is another place full of Awliya.

With belated thanks to Hamza W. and Ibrahim.

If you wish to visit these places then please see attached links:
http://sheikhynotes.blogspot.com/2010/06/marrakesh-trips.html


Miracles of the Men of Allah


Who are the Awilyah?
Please click here
Scribbled by Sh. Arfan Shah at Thursday, October 14, 2010

Email ThisBlogThis!Share to TwitterShare to FacebookShare to Pinterest
Labels: Awliya, Miracles of the men of Allah, Morroco, Shadhali Shuykh, Tasawwuf