Email ThisBlogThis!Share to TwitterShare to FacebookShare to Pinterest
Labels: Sheikh Saad Al-Attas, The Prophet (peace and blessings of Allah be upon him)

(These are general rules but do not take them too seriously!)

Satan can appear to men in their dreams

Hold a rope in a dream - is like holding onto Deen

Biting your fingers, you are showing sorrow for your sins

An Elephant means an oppressive ruler

Get a stone in a dream – obtain forgiveness

Passing over a bridge – running to Allah Subhanu wa Ta’ala

Umar ibn khatab (may Allah be pleased with him) was seen in a dream with a long thoub, which the Prophet (peace and blessings be upon) said it reflected his righteousness

Kufr – you are hiding something

Seasons and climates fit each other
- cold in cold, warm in warm
- season of food
- dry branches – beaten

Abbassid king saw a dream in which all his teeth fell out he called one interpreter who told him all his relatives would die, he was punished
The second interpreter said the king would outlive his relatives and he was rewarded

Step on a snake – growing farm

Beaten – get some good

Beaten on the back – debt pay off

To see good dreams, clean yourself of the dunya

The Prophet (peace and blessing be upon him) said, “Wudu is a weapon of the Muslim.”

Spit lightly over your left hand shoulder and seek refuge

Never make up a dream
Scribbled by Sh. Arfan Shah at Monday, October 23, 2006 No comments:


Its not easy for a speaker to come and speak to you, from Damascus

Two invasions are taking place, in Lebanon and Iraq, they are taking revenge on ordinary people

An American once asked him why do you hate us, we don’t hate you

We don’t kill non-Muslims, we call them to Islam

We do not stab in the back

The Prophet (peace and blessing be upon him) banned Muslims from killing innocent people women, children, religious people

If we look at ourselves as Muslims we will find out that we have a lot to offer humanity. We are responsible to humanity and take them out of misguidance

We are better than others with the shadhda

His father saw the signs of victory, as people see the day, they are like (the scholars) mountains, unmoving

During the battle of the trench, he (peace and blessing be upon him) broke a rock, he saw victory

Islam will reach where the sun reaches, Islam will be in every home

Palestine will be liberated

Some people who don’t have conviction in multi faith dialogues

People fear Muslims, if they don’t fear (awe), then there is something wrong

The Prophet (peace and blessings be upon) said he was given five things that no one else was, victory, fear, the distance of one month, travelling

One months travelling includes all Arabia where he (peace and blessings be upon) passed away, Islam had already gone across Arabia

This means the whole world

Why do you expect to people to respect you, when you don’t show it in your behaviour

The major achievement of communism was to take people from Christianity

There is no religion that survived ideological attacks except Islam

With half a mile of the Umayyad masjid, there is the Christian and Jewish quarter (in Damascus)

We have a long history of tolerance

We have to look at ourselves and ask the question, if we are solving (problems)

We have a power behind us, which is stronger than anyone

It doesn’t matter if we or our children see it, Islam will be triumphant

Secular Muslims are doing a lot of damage to Islam

When we go home we have to do something practical

We need to pray five times a day

Sidi Ahmed Zarruq (may Allahs mercy be with him) examined people who prayed Isha and Fajr in Jamma and no problems befell them. This is from an hadith.

True belief is based on knowledge
Scribbled by Sh. Arfan Shah at Saturday, October 07, 2006 No comments: 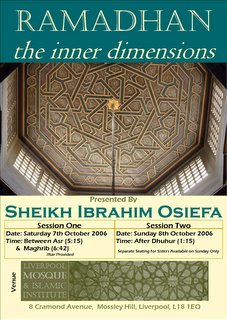